From Dreams into Goals into Reality

About three years ago in Berlin, the thought came to my head and stuck there. I had just witnessed an amazing mime evening where four mimes, solo and together, gave one great performance after another. Performing myself in a similar event later that spring confirmed the idea: this doesn’t exist in Finland, but it’s exactly what we need there!

So I started to speak out loud about organising a mime evening in Helsinki. The very same night I said to a local colleague, “I want an event like this in Finland too.” He said – being a realist – “It will take time. But you can do it.” So I decided to turn the thought into reality.


It did take time. Planning, grant applications (a couple rejected ones before getting accepted), coming up with the name and the visuals... And the biggest question, who would actually produce the event and organize everything? Even us artists are reasonable enough not to start organising such an event alone.

Then last year, many things came together: we received a grant for HELMIME from the Finnish Cultural Foundation and got to work with Pragma Helsinki, a new company providing production, management and agency services. HELMIME Mime Club was selected as a cooperation project with Pragma, and so the planning and production of a mime evening got really started.

And in less than a week it will finally be true – which is almost hard to believe! Pinch me then on Friday 28 Feb, so I’ll stop to notice how dreams come true.


Actually, the words “wish” and “dream” are a bit misleading. This was pretty much the goal right from the start. The will and desire to show everyone I know and don’t know, what the mime I talk about is really like. So now, if you’ve sometimes wondered what it is that Kati actually does and what is so cool about mime, come and see!

I’m really happy about the evening’s performers. They (we) are not only skilled mimes, but also renew mime and make it theirs. The love for the game shows as uncompromising work and in the joy they do they work with. As a cherry on top, they are also good friends of mine, and what would be more fun than share the stage with your friends. I also hope to see as many friends as possible in the audience, every familiar face in the crowd counts!

So welcome all to this first ever mime evening in Finland!

PS. HELMIME Club will also be my personal comeback to the stage after a one-and-a-half-year long pause. A little exciting but let’s just keep training! 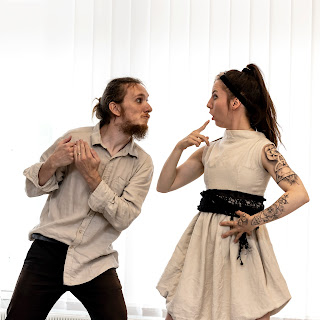